The evening started well with John H confusing a television show with a very British beverage.
Fleabag, a dry-witted woman, known only as Fleabag, has no filter as she navigates life and love in London while trying to cope with tragedy. The angry grief-riddled woman tries to heal while rejecting anyone who tries to help her, but Fleabag continues to keep up her bravado through it all.
Tea Bag, a dry perforated bag, also known as Tetley, PG tips, Twinings, Ty-phoo & Yorkshire. Navigates hot water through tea leaves to help the consumer to cope with the tragedy of life with a nice cup of tea. Even those that reject it for a Latte or Cappuccino. But keeps up it's bravado especially in Yorkshire, well someone has to keep Michael Parkinson in work.

The second round saw, what was probably the most irresponsible comment from a judge that I have ever heard. One of the pictures showed some machinery with part of a red notice, the judge suggested that the notice should have been cloned out. This sign was actually a Health & Safety Notice, removing it could have caused serious injury or death. Someone could have their eye out. I think judges should keep their comments to moving to the right a bit or stepping back a bit that way only the photographer ends up in danger.

After two rounds a bit of a pattern was emerging, the final image in both the  first two rounds were given a ten. I heard murmurings around me, with people hoping that there image was not going to be the last in the next round, there were audible sighs of relief when an image came up in the middle of the set, only to be disappointed when it was given a ten, annoyed that they had been lulled into a false sense of security.

The tea break came with the usual comparing of points. "I've got two tens, luckily the rest are sevens"

Dick realising that his team were doing better than expected tried to miss out a round luckily there were some observant members that noticed.

The eventual winners were that well known firm of solicitors Ellis, Saville & Travasso.

For the second year running we have won the Dagenham Invitation Trophy and one of our members has won the best print.
Congratulations to Eric Bush for his image of, yes you guessed it Southwold Pier. 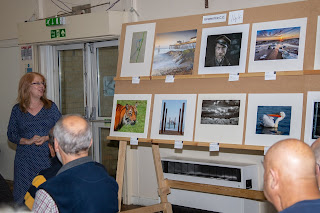 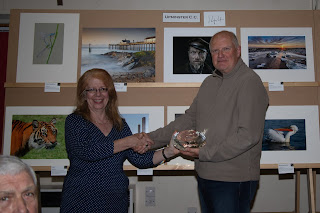 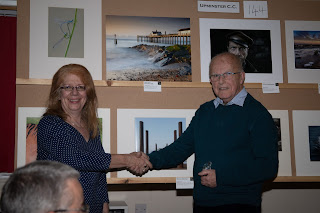